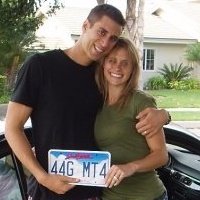 This post is part of a 3-part series about the CPMFitness story. Catch up on part one here!

It was spring of 2008. Annie and I were newlyweds living in a Los Angeles 700 square foot, one-bedroom, one-bathroom apartment. It had street parking and no laundry, but we were 1.5 miles from the beach.

I was 27 years old, had a beautiful wife, was training a few clients, and on the search for an opportunity.

Since I began personal training in 2001, I had recently found this new way of training called CrossFit, and it instantly gave me the recharge in my personal fitness that had been lacking for quite some time.

I came home on a California spring night to find Annie on the internet looking for homes. I instantly thought she was “dream building” and looking around the west side of Los Angeles. I came to find out that she was looking for houses in South Dakota!

“Look babe, this house is three times the size of our apartment and the mortgage is a few hundred dollars less!”

Honestly, I thought nothing of it at the time, although I was curious to where this idea was coming from. As the weeks went by, I noticed she would continue looking at South Dakota houses and talking about it more frequently. Finally, one day she confided in me that she was not happy with where we are at in our lives.

“LA is too big. I want to own a home. I want to raise our future family outside of California.”

The Decision to Move to Sioux Falls

At the time, I was blinded by the beach life, great weather, and was content.

But the more we discussed it, I began to realize that she was exactly right. I didn’t have a focus, purpose or goal and I was up for an adventure. And as we discussed the possibility of moving to Sioux Falls, I did find some things about the city that caught my eye and really helped make the decision for me:

Then, in June 2008, we officially made our decision. In September we packed up the moving truck, our car, and we were off to Sioux Falls, South Dakota.

Our family and friends thought we were crazy, but we knew that we were up for the adventure. I think a lot of people want to take a leap like we did, but are too afraid to pull the trigger and make it happen.

From there, began building our dream. Here’s a glimpse of how it all played out:

We arrived in Sioux Falls and knew all of about three people at the time. But I had a dream, and I was going to get right to work.

We started very minimal with a 1200 square foot space (about 900 square feet of gym space) and limited equipment:

We were in business. Our doors opened to the public, and I did what I could to spread the word. We sponsored a fitness idea with KDLT, got on CrossFit Radio for an interview (listen to it here), and started passing out flyers. Slowly, people started to come.

The start of the gym was slow but steady. As the weeks rolled on, we started to learn a few things.

The more we poured into our gym, the more we received back.

Though we started knowing three people in Sioux Falls, we had grown the gym to a near 200 membership. We had poured our blood, sweat, and tears into our first business.

We were then presented with another opportunity.

We could move back home to California and sell our business. With much thought, prayer, and talk, we decided to take that next opportunity and move back to California. This ended our adventure with Sioux Falls.

Little did we know, it was only first go-around with Sioux Falls…

Next week, find out why we came back (and why we are here to stay!)

Learn more about membership at CPM »